My Promise to You: SocialGood Founder’s Message

Hello to everyone in the SocialGood community.

I am Soichiro Takaoka, the founder of Social Good Foundation Inc.

I am so grateful to you all for your continued support of the SocialGood Project.

Thanks to you, we have gained over 1.85 million users, and in March we announced that we successfully raised $14.2 million in VC equity funding.

Based on this graph, it looks like we can reach 10 million users within this year.

The plan is to list SG on well-known crypto exchanges in addition to the exchanges we are already listed on, including Bittrex and MEXC.

But do you know why our user base is growing exponentially?

As the history of Bitcoin has shown, the value of a token rises as the number of holders grows. (This is not a promise from Social Good Foundation Inc. that the value of SG will rise in the future.)

They call this the token ecosystem. We could expect to see the same effects for SG as we have seen for Bitcoin.

The more the SocialGood App user base grows, the more SG holders there will be.

The more SG holders, the more value that the app will have, because it gives away SG for free.

And the more valuable that the app becomes, the more the user base will grow.

This is the network effect in action.

Over 90% of SocialGood App users hold their SG long term without withdrawing it from the app, because they understand token ecosystems. And these long-term SG holders also recommend the SocialGood App to their friends and family for the same reason.

As the founder of the SocialGood Project, I am committed to the long-term rise of SG’s value. In order to ensure this, I am doing my utmost to achieve 10 million users of the SocialGood App as quickly as possible.

Well, let’s look at the facts.

A Large and Growing Market for Crypto Rewards

There are 5 billion mobile users worldwide.

And according to a survey by a research firm, 55% of shoppers aim to receive cashback or rewards when shopping online.

About 2% of mobile users hold crypto.

Therefore, you can easily calculate the market for the SocialGood App, right?

And as you know, the crypto market is growing at a tenfold pace in just two years, so we can expect that the market size for the SocialGood App will become 550 million people.

If you think of it that way, don’t you agree that it doesn’t seem long until the day when the SocialGood App reaches 100 million, even 200 million users?

Now I am sure some of you are thinking, “if there’s such a huge demand, surely there will be aggressive competition entering the market.” You may think that there’s no guarantee that the SocialGood App would succeed against these rivals.

It’s true that when I first started the SocialGood Project, there were already at least ten or so rival companies worldwide.

However, most of them have since disappeared. And why would that be?

So, many of those other companies decided to leave the cryptocurrency rewards market, judging that if another company has always registered patents then it would be better to develop elsewhere.

Our successful registrations total to 68 patents. Of course, patents alone don’t guarantee that the road will be easy, but I believe that as we are the early innovators, it will be very difficult for our competition to overtake us.

That’s why I sincerely believe that we can grow the SocialGood App to gain the most users of any app in the world. I also plan to make our native token, SG, the most-used cryptocurrency, usable as a payment method at stores worldwide.

I have always believed that we could make this happen, even before we had a single user.

And it’s only natural that our SocialGood Project started in Japan. Do you know why?

Japan was the first country to lead the world in legitimizing cryptocurrency, and Japan is also the largest market for shopping rewards in the world. Japanese people use reward points from their shopping towards their purchases every day.

That is why the SocialGood App is highly refined as a crypto cashback app, switching out the electronic point system for Crypto Back rewards.

The SocialGood Project, originating from this country that loves crypto and rewards, has therefore grown to gain users in over 200 countries and regions worldwide, spreading virally mostly through word-of-mouth.

We are also so grateful to have received support from the Japanese government to facilitate our global expansion.

You can see our introduction here, as supported by JETRO and the Tokyo Metropolitan Government:

Let me share a bit more about Japan. When you think of Japan, you may think of the spirit of Zen, so loved by Steve Jobs and others. The SocialGood Project also comes from a Japanese cultural background.

In Japan, we have a way of thinking about business called “sanpo-yoshi,” which literally translates to “good in three ways.” This is the belief that the best business is one that is good for customers, good for the company, and good for society as a whole. It’s a “win-win-win” situation.

This is how the SocialGood Project is a sanpo-yoshi, a win-win-win:

Consumers can gain assets for free; they can shop at less cost.

Stores can attract customers who are more motivated to shop.

As users increase, the market cap of our SG rises, and our company receives advertising fees from partnered stores.

And finally, do you know why I named this project “SocialGood”? To put it simply, I want to create a world where anyone can gain assets just by shopping. I want to improve society by democratizing asset-holding.

We will grow the SocialGood Ecosystem™ globally to make the world a better place.

A Much-Needed Update to Capitalism

The majority of people worldwide do not have any assets, valuable resources that can provide future benefit. They continually lose money by buying their daily necessities and therefore are in no position to build up assets for the future.

On the other hand, asset owners, the shareholders of companies who are profiting from consumers, increase the value of their assets over the long term through dividends from the companies and the rise in value of their stock holdings.

For example, global stocks are increasing in value at an average rate of 6.2% every year, so it could be calculated that an investment grows by about 6.1 times its original value over a 30-year span. (MSCI World Index data, end of 1989 to the end of 2019, returns including dividends)

In this way, our current capitalist system is further increasing the economic gap between the few wealthy people who already have assets and most people who are struggling and unable to own assets. Experts have recognized this automatically-expanding economic disparity between most people and the wealthy few as a serious problem faced by societies worldwide. (e.g. World Economic Forum, Davos, Switzerland, Jan. 21-24, 2019)

The SocialGood App was created to solve these societal problems and update the way that capitalism works. That is why our service allows consumers to actually gain assets from their usual shopping, instead of just losing their money with each purchase.

By expanding the use of SocialGood App globally, we aim to decrease the economic gap worldwide and benefit society overall. In the future, we plan to automatically donate a portion of the SocialGood App’s Gross Merchandise Value to organizations worldwide that have a positive impact on society and the environment.

The goal of the SocialGood Project is to grow our community to have 5 billion members worldwide.

That being said, we still have a long way to go to reach these goals, so we need the continued support from everyone in the SocialGood Community.

Let’s all work together to make our world a better place.

Thank you very much for your continued support of the SocialGood Project.

Our Mission: To build the world’s largest global platform and to provide financial freedom to all people worldwide.

Our Vision: To become the top cryptocurrency and global mobile app with the highest number of users.

This Is Where You Start Your
Crypto Back Journey

Get the most out of your online shopping and earn up to 100% crypto back on all purchases up to $10,000 dollars made on the SocialGood app.

Over 1.85 million people are already using the SocialGood App. Join now to get a $30 Signup Bonus.

The SocialGood App, which gives users cryptocurrency rewards for shopping, has raised $14.2 million in Series A funding from a venture capital firm. 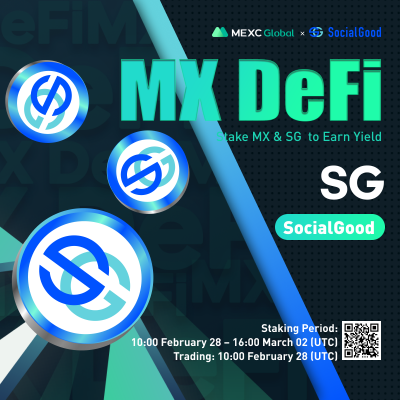 SocialGood (SG) is now available on MEXC! It’s now easier than ever to get more SG for higher staking rewards! Check out the “MX DeFi” ...

You've been invited to join SocialGood. Enjoy $30 worth of SG for free with your first purchase.

Use the QR code or links store links below to download and claim your sign up bonus!!